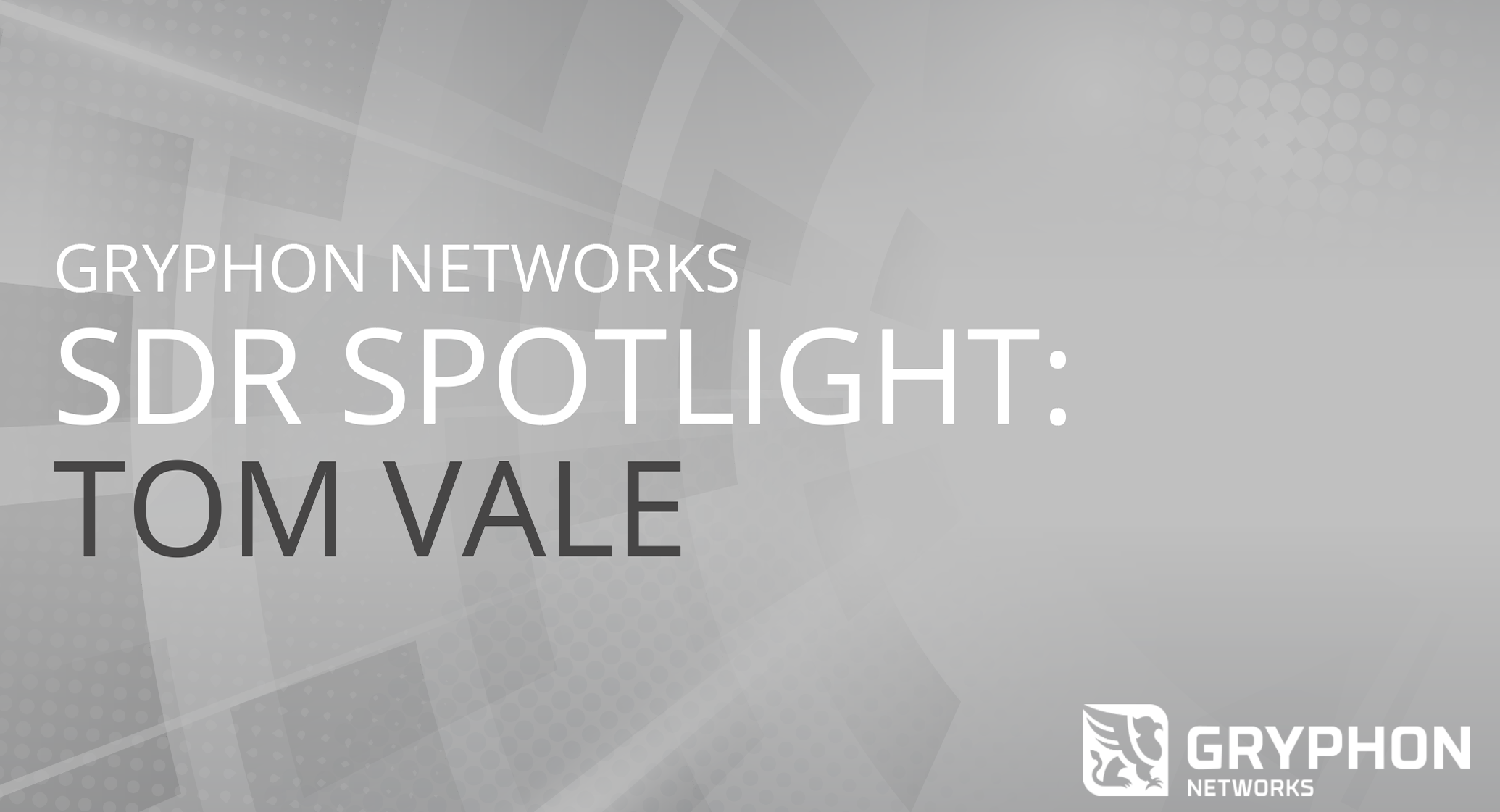 Tom Vale is a Business Development Representative here at Gryphon Networks. In this interview, Tom shares a few insights on his day-to-day as a BDR, best practices he adheres to, what it was like to onboard remotely, and – not to mention – how he crushed his numbers in Q3!

Gryphon Networks: Tom – can you run through your day-to-day as a BDR?

Tom Vale: Sure. My day starts with admin work; I work the west coast territory, so I do admin work from 8am until 11am EST, which is realistically when I can start dialing due to the time difference. There are two main things I do, the first of which is checking to see where I’m at in my cadences and understanding where I’m at in terms of sourcing and bringing in new people. Next, I check to see which are hot contacts, meaning I’ve made four or less calls to those contacts, and which are leads that aren’t so hot anymore.

Once I’ve completed all the administrative work I need to do, I look back at contacts that I’ve set call-backs with or emails I plan to send during the day, and that’s usually all done by 11am.

Around 11am, I start calling contacts based on two things – the first of which is geography. I have a very wide territory (MST to PT), so I have to be organized with what states and time zones I’m calling.

Next, I make calls based on my “golden hours” – the times when people are most likely to pick up. When I have time outside of those golden hours, I call contacts that I’ve called more than four times, meaning leads that I’ve already worked. I do this because in my first four attempts they haven’t picked up in that golden hour range, so I try different times – usually between 11am and 3pm.

I consider 3pm till 6:30 or 7pm to be my golden hours. This is when I book most of my meetings and make most of the pipeline for Gryphon. Based on the data that I’ve run from previous experiences, I know that if I’ve called a lead fewer than four times, they’re still most likely to pick up during these hours. It allows me to boost my connect rates if I make dials to new prospects during this time. Then, after 7pm, I’ll finish my dials for the day with calls to contacts that I’ve already called before, and send out a few emails. I’ll be done with my day around 9pm.

How does technology assist you in the sales process?

Technology is the main reason I’m successful, beyond the skills I’ve developed as a BDR like speaking to prospects, tone, and all that. The “golden hours” schedule that I’ve developed is thanks to technology. The tech we have at Gryphon tells me the best times to call people and the best numbers to call at any given time of day – that’s pretty unique. That data is super valuable to people like me, and it’s really helped my performance.

I also host an “SDR best practices” meeting every Wednesday where we go over things we’ve found on calls, and bounce ideas we have off each other. We wouldn’t be able to do that without Gryphon’s technology

Lastly, onboarding and training with our learning platform, Amplify, is very efficient. I onboarded in two weeks – that’s nuts. That doesn’t happen elsewhere. At my previous role at a different company in the SaaS industry – a company that is well-known for its training programs – it took me about a month or five weeks to be fully ready to go. Gryphon cut that process in half, all while in a virtual environment.

How do you keep yourself on track while working from home?

We have that meeting every Wednesday to go over things from the previous week or help other people who’ve had issues, but in terms of the day-to-day, I always believe in relying on your calendar. Putting time on each other’s calendars to discuss things and ask questions is really important. If you don’t have that calendar culture, or structure in a BDR team, you don’t get a lot done because you’ll waste time allotted to make your calls and do your job. Setting up structured time to speak is very helpful.

What are some goals you set for yourself aside from what’s expected of you?

At the most basic level, I like to go on two 15-20-minute walks every day for my own personal sanity. You need to get out of the house in this virtual environment. But during the day I set hours where I want to get a certain number of calls done. When you have a day with a lot of set meetings, that’s hard, and you need to be flexible with your goals. But when you set those goals and say “I’m going to make X number of calls by a certain time,” and when you hold yourself to that, your day becomes a lot more fluid.

Personally, the biggest metric indicative of success that I believe in is connect rates – the number of times I get someone on the phone. I try to get five people on the phone every day, that’s my goal. If I make it to 100 dials or not, that’s not a huge issue, but if I can get five people on the phone, that’s the bare minimum I want to achieve. That’s not always possible though; the hardest thing about business development isn’t even speaking to people, it’s getting them to pick up.